A Jehovah’s Witnesses spokesman said that ‘there is growing concern that Tesfazion may not live long enough to ever be reunited with his family and friends.’

(RNS) — Religious liberty and human rights experts, including a member of the U.S. Commission on International Religious Freedom, are calling for the release of an 80-year-old Jehovah’s Witness who has been detained in Eritrea for more than a decade, along with other members of his faith.

“USCIRF is concerned about the wellbeing of 80yr old Jehovah’s Witness Tesfazion Gebremichael who’s been imprisoned in #Eritrea for the last 11 yrs for his relig. Activity,” said Commissioner Fred Davie in a tweet posted by the commission.

Gebremichael has been retained in the Mai Serwa prison along with 18 other members of the faith, said Jarrod Lopes, a spokesman for the Jehovah’s Witnesses. Another is located at a second prison.

“Due to his age and the poor prison conditions, there is growing concern that Tesfazion may not live long enough to ever be reunited with his family and friends,” Lopes said in a statement. “Four imprisoned Jehovah’s Witnesses between the ages of 62 and 77 have died, since 2011.”

Amnesty International, which has documented inhumane conditions in the detention of Jehovah’s Witnesses in Eritrea, also expressed concern about Gebremichael and other members of the faith group in the northeastern African country on the coast of the Red Sea.

“In the absence of any information about their whereabouts and their fates, their detention amounts to enforced disappearance,” said Fisseha Tekle, a researcher for the human rights organization on Eritrea and Ethiopia, in a statement. “Hence, for years Amnesty International and other human rights organizations have been requesting the Eritrean authorities to disclose their whereabouts and their fates, and (if) they are still alive, to release them immediately and unconditionally.”

Jehovah’s Witnesses, who are by faith conscientiously opposed to war, declined to take part in the Eritrean War of Independence, waged between Ethiopian separatists and the Ethiopian government from 1961 to 1991, and many were subsequently imprisoned and denied citizenship by the government.

USCIRF’s 2022 report noted some of the 20 Jehovah’s Witnesses imprisoned in Eritrea as of December 2021 had been detained for more than two decades.

It called on the Eritrean government to grant Jehovah’s Witnesses full citizenship rights and release those detained because of their religious activities.

In 2021, Secretary of State Antony Blinken redesignated Eritrea as a country of particular concern, a designation it has been given since 2004 for what the U.S. considers its toleration or engagement in severe religious freedom violations.

Since 2020, 32 Jehovah’s Witnesses have been released from prison in Eritrea, but a recent report from the faith group notes those former detainees are still considered enemies of the state and are under a conditional form of arrest and subject to reimprisonment. 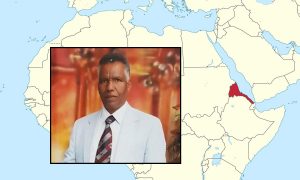