Three Indonesian siblings were reportedly denied promotion to the next grade for three years in a state-run elementary school in Tarakan, North Kalimantan province, for being Jehovah’s Witnesses.

An official at the Indonesian Child Protection Commission (KPAI) revealed that the siblings aged 11, 13 and 14 were denied access to religious studies despite requests by their parents to let them study Christianity so that they could pass on to the next grades, on grounds that their denomination was incompatible with the faith.

Retno Listyarti from KPAI said in a written statement, a copy of which was accessed by UCA News on Nov. 23, that the students had to repeat their respective grades for three consecutive years since the 2018-19 academic year as a result of their beliefs.

“The students were held back in the academic year 2018-19 because they were absent from school for more than three months. As a matter of fact, they stopped studying after being expelled from school,” she said, adding that their parents brought the case to the Samarinda Administrative Court, which allowed them to go back to school.

“The school has violated the law by not giving them access to religious studies, setting baseless requirements and questioning their belief,” Listyarti said.

The school finally allowed the siblings to pursue religious studies in the academic year 2020-21 but they were forced to sing worship songs against their beliefs. They were refused promotion once again and thus expressed their unwillingness to go to school, she added.

Listyarti said the KPAI was coordinating their case with the General Inspectorate of the Education, Culture, Research and Technology Ministry.

Meanwhile, F.X. Hasto Budi Santoso, the school headmaster, denied he ever questioned the students’ beliefs but acknowledged he found it difficult to educate them.

They refused to salute the national flag and sing the national anthem, he told Kompas.com. “Their deeds are based on their belief” and “I do not have the courage to say that their belief has an influence on their nationalism,” he was quoted as saying.

Jehovah’s Witnesses believe that bowing down to a flag or saluting it, often in conjunction with an anthem, is a religious act that ascribes salvation, not to God but to the state or to its leaders.

Speaking with UCA News, Father Antonius Benny Susetyo, a member of a presidential unit promoting communal tolerance, said the case was related to the school’s regulation instead of the students’ belief. “A school’s regulation must be obeyed. It is about being disciplined,” he said.

Referring to the students’ refusal to salute the national flag, he said: “It is a must for every citizen. Anyone who refuses to do so must not stay in Indonesia.”

Jehovah’s Witnesses were banned in Indonesia under the 1976 Attorney General Decree because of a series of legal violations such as their refusal to salute the national flag.

However, the decree was revoked in 2001 following the issuance of, among others, the 1998 People’s Consultative Assembly Decree on human rights.

Reports say that Jehovah’s Witnesses have been registered as a legitimate religious group and synod under the Religious Affairs Ministry’s Christian community directorate general since 2002. It has more than 26,000 followers in the country. 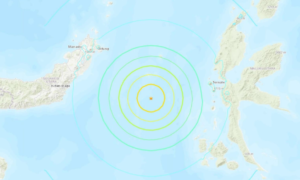